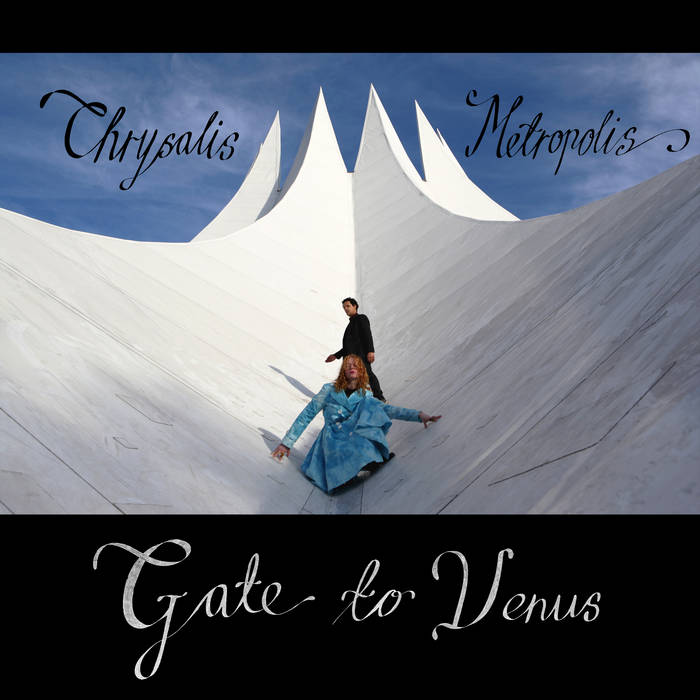 
Chrysalis Metropolis is the debut album from Gate to Venus. It will be released digitally on the Spring Equinox March 20, 2020. It is a double LP where “Chrysalis” represents nature and transformation,

while “Metropolis” represents cities. The songs were written and recorded in a church in the North of Denmark, in the streets and on trains throughout Europe as well as in Berlin and the South of Portugal.

Gate to Venus emanates from the confluence between Cecilie Beck’s background in the European tradition of music, Scandinavian gospel, British pop/rock and Gabriel Gordon’s American roots in blues, soul, funk, gospel and rock. Their collective influences range from Björk, Joni Mitchell, Prince, Bowie, Hendrix, Eurythmics, Jeff Buckley and the Beatles. One of the unique aspects of the band derives from the fact that both Beck and Gordon are primarily self taught musicians and share a love of song - they began song writing at an early age and both grew up in small towns (Denmark and California respectively). The dichotomy between Central California and the middle of Denmark creates a shared vision from across the planet that can be heard in the music.

Beck is a classically trained visual artist (Royal Danish Academy of Fine Arts and Parsons School of Design in New York City) and has lived in various countries around the world. Her music background comes from the European tradition of John Lennon, David Bowie, Björk, Brian Eno, The Knife etc, who are all part of the Art School scene. They often channel their vision via Alter Egos, where they can become whatever they want.

Gordon started working in New York City at Jimi Hendrix’ Electric Lady studios and subsequently began touring and recording with bands like Soup Dragons, Natalie Merchant and Andrew Roachford and eventually shared stages with the likes of Bob Dylan, Bruce Springsteen, Al Green and Meshell N’Degeocello. Gordon’s father is also a musician and was born in the hill country of Mississippi and passed on the blues tradition to his son as a way to freedom and a road to a better life with more self-esteem in addition to the pressing need for a cry for justice and the end of racism.

Both Beck and Gordon are solo recording artists with multiple releases. They met in Berlin in the summer of 2019 and began collaborating immediately with producer Robert Philipp.

The song "Gate to Venus" was co-written while Gordon was on the ground in Germany and Beck was flying over the Arctic Ocean on the way to New York. They sent each other voice memos and lyrics and completed the song within an hour. 2 weeks later they debuted the song on stage on their first tour. The same week they went to Kaiser Base Studios in Berlin and recorded the track with producer Robert Philipp. The video was filmed between Berlin, Northern Germany and the west coast of Denmark.

"Here is music that transports you and speaks to the soul by way of the music’s atmosphere, comprised of the lyrics’ fantastic imagery and highly original guitar voicings supported by a steady beat and some magnificent production."

“Save It for the City” was written while walking the streets of Frankfurt and actualized in the studio in Berlin a few days later. The haunting opening passage of music immediately brings the listener into Gate to Venus’ world and conveys the revitalization one senses when visiting a new city. The video was filmed in Paris as well as in southern Portugal where parts of the album were written and recorded.

The band’s name Gate to Venus was inspired by conversations about the Sumerian Civilization and strange phenomena around Mount Shasta in Northern California. At the Pergamon museum in Berlin, there is a reconstruction of the eighth gate to the inner city of Babylon called Ishtar Gate. Ishtar was the Mesopotamian goddess of Love like the later version we know as Venus. Gate to Venus aspires to connect to love through beauty (music) and when singing “one day there’ll be no space between us” the band claims that we can all achieve connection with our inner power; our own beauty and self love with the goal of becoming one with humanity and nature.

"Very Mazzy Star meets Lee Hazlewood and Nancy Sinatra. Some of the coolest shit (...) You guys got a vibe! Keep writing!"

Gate to Venus is available

Kari Faux drops off her deluxe album 'Lowkey Superstar' plus tunes by Shunaji and Samplelov.